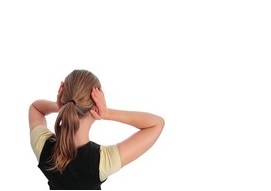 Tinnitus is the medical term for the perception of sound in one or both ears when no external noise is present. The noise seems to originate in the ear or head. Most of us will experience tinnitus or sounds in the ears at some time or another. Tinnitus can be extremely disturbing to people who have it. In many cases it is not a serious problem, but rather a nuisance that may go away. However, some people with tinnitus may require medical or surgical treatment.

Tinnitus can arise in any of the four sections of the hearing system: the outer ear, the middle ear, the inner ear, and the brain. Some tinnitus or “head noise” is normal. A number of techniques and treatments may be of help, depending on the cause.

Some of the most common include a sound of crickets, buzzing, hissing, whistling, and high-pitched ringing. Other types of tinnitus include a clicking or pulsatile tinnitus (the noise accompanies your heartbeat). The most common type of tinnitus is known as subjective tinnitus, meaning that you hear a sound but it cannot be heard by others.

Tinnitus is not a disease in itself but rather a reflection of something else that is going on in the hearing system or brain.

Probably the most common cause for tinnitus is hearing loss. As we age, or because of trauma to the ear (through noise, drugs, or chemicals), the portion of the ear that allows us to hear, the cochlea, becomes damaged.

Current theories suggest that because the cochlea is no longer sending the normal signals to the brain, the brain becomes confused  and essentially develops its own noise to make up for the lack of normal sound signals. This then is interpreted as a sound, tinnitus.

This tinnitus can be made worse by anything that makes our hearing worse, such as ear infection or excess wax in the ear.

Tinnitus caused by ear trauma is usually noticed in both ears, because both ears are usually exposed to the same noises, drugs, and other influences. Loud noise exposure is a very common cause of tinnitus today, and it often damages hearing as well. Unfortunately, many people are unconcerned about the harmful effects of excessively loud noise from firearms, high intensity music, or other sources.

Depression is a frequent side effect of tinnitus. The constant noise, combined with the loss of the ability to concentrate and a feeling of helplessness can have a significant effect on your emotional health.

People suffering from depression often find themselves on a downward spiral, finding it harder and harder to pull themselves back out as it gets progressively worse. Since tinnitus is frequently a manageable and potentially curable condition, a lot of support and help is available for those suffering from it.

Counsellors, therapists and advocacy groups exist to help you coexist with your tinnitus. If you think you are experiencing tinnitus but are still unsure, contact a hearing care professional today.

In the majority of cases, tinnitus is caused by damage to the hearing organ. In these cases, there is normally no need for treatment other than reassurance that the tinnitus is not being caused by another treatable illness. In the very rare instance where the tinnitus is extremely bothersome, there are a number of treatment options.

Some of the most helpful include antianxiety or antidepressant medication and sometimes maskers-small devices like hearing aids that help to block out the sound of the tinnitus. For people who are bothered by tinnitus only when trying to sleep, the sound of a fan, radio, or white noise machine is usually all that is required to relieve the problem.

Most people with tinnitus find that their symptoms are worse when under stress, so relaxation techniques can be helpful.

• Avoiding caffeine is advised, as it may worsen symptoms.

• Biofeedback may help or diminish tinnitus in some patients.

Depending on the type of tinnitus, symptoms will tend to come and go over time. Although there  currently is  no cure for the condition, a combination of hearing aids, counselling, sound therapy and coping techniques may be effective in controlling your symptoms.

Find way to reduce stress, and protect your hearing from additional damage from noise exposure. Stress level, diet, and exposure to noise can worsen tinnitus. Maintain a positive outlook for managing your condition and surround yourself with supportive people who will help you cope.

Many people find their tinnitus annoying but can learn to adapt without difficulty.

What causes pain behind the ears?

How to tell if you have hearing loss?